Alicia Díaz was born in San Juan, Puerto Rico.  Her mother, Alma Concepción, was a professional dancer and had a dance studio on the first floor of their house.  By the time Díaz was 3 years old, she was so eager to dance that her mother designed a creative dance class for children.  Her training later included ballet and Spanish dance.  She also spent countless hours in rehearsals with her mother in the renowned Taller de Histriones, directed by Gilda Navarra, an experience that left an enormous impression and has informed her artistic aesthetic.

At the age of 12, Díaz moved to Princeton, New Jersey, with her family.  She continued her dance studies at the Princeton Ballet School under an outstanding dance faculty, including Virginia Griffith and Dermot Burke.  She became a member of the Princeton Ballet II and danced with them for two years.

With an interest in both dance and academics, Díaz chose to pursue a college career and began her studies at the University of Michigan (U-M).  She was given special permission to enroll in classes in the Dance Department while she studied anthropology.   She trained with and performed in works by Bill de Young, Peter Sparling, and Linda Spriggs. One of the most memorable and formative experiences for Díaz was participating in a multi-week workshop with Dr. Pearl Primus, the eminent dancer, choreographer, and anthropologist.

After two years at U-M, Alicia transferred to Eugene Lang College in New York City (NYC).  There she formally merged her interests in dance and anthropology and majored in Art, Culture, and Society.  While studying at Lang, she was able to return to the Ailey School to continue her dance studies.  She also created an internship for herself at the Center for Puerto Rican Studies at Hunter College where she became a research assistant in projects dealing with Puerto Rican culture and identity.  These simultaneous experiences informed her artistic and scholarly work and she wrote her senior thesis on the role of dance in the making of identity in the Puerto Rican community in New York City.

After graduating college, Díaz joined her first professional dance company, Contemporary Motions, directed by her mentor, Julio Rivera, and performed with them in the United States, Puerto Rico, and the U.S. Pavilion in the World Fair Seville Expo ’92 in Spain.  Díaz went on to perform with the Joseph Holmes Chicago Dance Theatre under the direction of Kevin “Iega” Jeff and toured with them nationally.  Later Díaz joined the Alice Farley Dance Theatre where she was introduced to sculptural costuming and improvisation as a tool to explore the gestural language of non-human forms.  She performed with the company in NYC at The Henson International Festival of Puppet Theater at the Public Theater, the World Financial Center Winter Garden, the Guggenheim Museum, and the Lincoln Center Out of Doors. 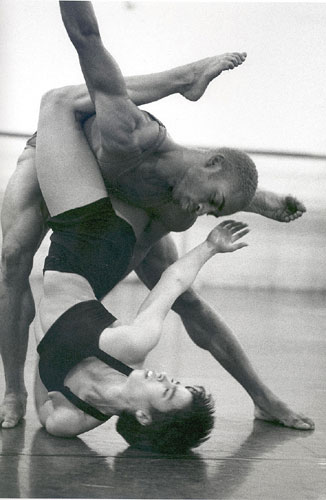 Díaz’s career took off when she was invited to join Complexions Contemporary Ballet, directed by Dwight Rhoden and Desmond Richardson.  Working alongside artists of the highest caliber, Díaz was encouraged to deepen her own artistic voice.  She performed with the company at The Joyce Theater, BAM and the Alice Tully Hall/Lincoln Center in NYC and toured with them to Brazil, Italy, and France.

Encouraged by her development as an artist, Díaz began to explore opportunities to create her own work.  She co-founded en la brega dance company with dance artist Ñequi González with whom she choreographed and performed works inspired by experiences of survival and resistance in marginal communities.  They presented their work at the Clemente Soto Vélez Cultural and Education Center, Union Square, and The Museum of Natural History in NYC, Princeton University, and the University of Puerto Rico.

In 1999, Díaz was invited by Lolita Villanua, to participate in the founding of Puerto Rico’s first full-time contemporary dance company, Andanza, Compañía Puertorriqueña de Danza Contemporánea.  During this exciting time, the company performed in the Centro de Bellas Artes, and the historical Teatro Tapia—where Díaz had seen her own mother perform as a child.  Díaz had the opportunity to present her work, 3 ó 4 Jugadas—a collaboration with two company members, vocalist José Luis “Fofé” Abreu, multi-media artist Antonio González Walker, and costume designer/performance artist Freddie Mercado.  The piece received very favorable reviews and was chosen to represent Andanza in the Primera Muestra Internacional de Performance in Casa de América in Madrid, Spain.   3 ó 4 Jugadas remained part of the company’s repertory for several years and was performed in Martinique, Cuba, and Mexico.

As a result of her creative endeavors, Díaz became more interested in improvisation and somatic movement practices.  She was introduced to Authentic Movement by Ricki Grater in NYC and received a certification in Thai Yoga Massage from Saranya “Bee” Thanapichead.  These practices highly influenced her artistic work.

Sensing a shift in her artistic interests towards a more body-centered practice, Díaz pursued graduate studies in Dance and Choreography at the Gallatin School of Individualized Studies at New York University.  She investigated the use of authentic movement as a tool for artistic creative process through interviews with contemporary choreographers as well as her own explorations.  Her research led to her written M.A. Performance Thesis: “Traveling Inward: A Choreographic Methodology” and the performance of “Love (in times of war).”

During her studies with Diana Taylor at NYU, Díaz examined Latino dance forms as embodied forms of resistance and published her research in the Washington Square News and The Oxford Encyclopedia of Latinos and Latinas in the United States.

In 2005, Díaz began to teach in higher education and served as dance faculty at Kent State University (2008-2009) and Hope College (2009-2011).  She joined the dance faculty at The University of Richmond in 2011, where she teaches contemporary dance, improvisation, and choreography.  She is one of the company teachers and resident choreographers of University Dancers.

Díaz received an M.F.A. in Dance in 2015 from The George Washington University where she was awarded a University Fellowship.  Her most recent creative research is leading her towards themes of Caribbean cultural memory and identity.  Her recent collaboration with Puerto Rican percussionist Héctor “Coco” Barez was featured in the PBS program Puerto Rican Voices: It Takes One produced by the Center for Puerto Rican Studies at Hunter College.